To many of us who had the fortunate experience of living for years in Italy, we miss many things when we return to our home countries. For me the list is long and populated with the foods I despaired at finding on this continent. But I was wrong.

Mozzarella in the U.S. is notoriously rubbery and tasteless. Burrata, the most decadent of all mozzarella cheeses, must be eaten fresh and doesn’t travel well from Italy

Burrata is a little mozzarella sack filled with creamy goodness. It’s made from fresh cow’s milk (Of course, I also love the version using the milk of water buffalos, but the breed is rare in the U.S. I wrote about mozzarella di bufala here and here.). The outer shell is solid mozzarella, while the inside contains stracciatella(“rags” of mozzarella) and cream, giving it an incredible rich, soft, creamy texture. 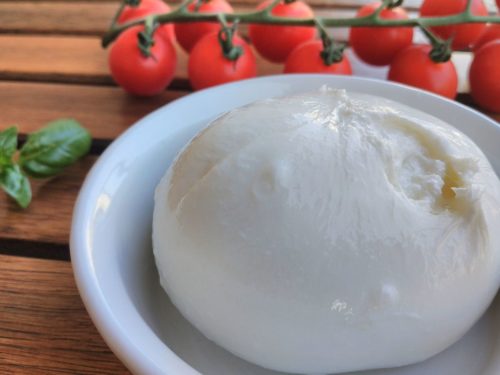 But then I discovered BelGioioso Burrata at Whole Foods. Of course, the company has deep roots in Italy. The BelGioioso story began over a century ago when the great-grandfather of the current BelGioioso President, Errico Auricchio, founded a cheese company near Naples. In 1979, Errico moved his family from Italy to America with the goal of continuing his great-grandfather’s legacy. He wanted to craft the best Italian cheeses in the United States.

When Errico came to America, he scoured the United States in search of the highest quality milk to begin his goal of making exceptional specialty cheeses. It was in Wisconsin that he found the dedicated dairy farmers and abundant green pastures that produce superior milk.

In addition to his immediate family, Errico also brought with him two master cheesemakers, Mauro and Gianni. They carried with them a strict focus on quality and a passion for crafting flavorful Italian-style cheeses using artisan methods. Mauro and Gianni remain part of the BelGioioso family today and work tirelessly to share their wisdom with each new generation of cheesemakers.

BelGioioso Burrata is not just close to the quality of burrata made in southern Italy, it is equal to that luscious treat, especially when paired with tomatoes from the farmers’ market, fresh basil, and a great extra-virgin olive oil. But what about that olive oil?

My preference in olive oil is the Tuscan-style that has a crisp flavor, like fresh-cut grass, green and a slightly sweet. It has a peppery aftertaste that can catch in the throat. It took me years to find an oil that measured up to Tuscan oil in the U.S. – I had friends bring bottles from Florence – but finally in San Francisco I found Bi-Rite supermarket-branded Frantoio Organic Extra Virgin Olive Oil, made for the specialty market by Frantoio Grove in San Martin, California. 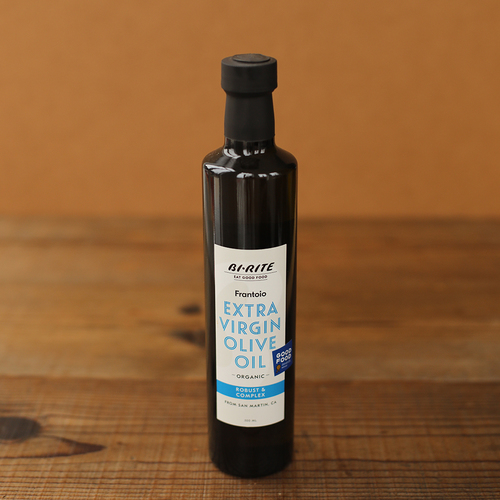 When I checked the Frantoio Grove website I found the following explanation from the owner:

The first step was to decide what style of oil to make. The vast majority of oil produced in California is made from Spanish varieties. Either the old growth canning olives (Mission and Sevillano) now converted to oil production or the modern varieties of Arbequina and Arbosana grown in high densities on a large scale. Both styles produce mellow more buttery oil, soft in flavor.  There are currently 50,000 acres planted to this style in California.

As a small producer, it made no sense to compete on their style of oil so I kept looking. The most interesting oil on the market to me were the Tuscan blends. These oils tend to be more pungent and peppery and, in my mind, more interesting. It was suggested that I consider growing an orchard using a single variety. After much research and tasting of varietal oils we decided on the Frantoio (Fran-toy-ō) variety and then planted Frantoio Grove in 2005.

The professional taster’s comments for the 2017 harvest are:

* Soft and beautifully balanced on the palate with a complex mixture of green and ripe fruity notes (nutty, floral, artichoke, fresh-cut grass, cinnamon, with some wood/hay/straw.)

* The finish is long-pleasantly peppery and slightly bitter with a lingering nutty sweetness.

I clearly found the olive oil for me! 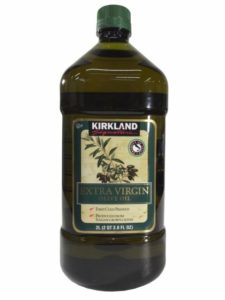 But since it is not inexpensive, I only use Frantoio olive oil for salads, veggies, bruschetta and burrata – any time the taste of the oil is an important part of the dish.

I have written about the meat empire in Panzano, a tiny town in Tuscany. It’s been over four years since I have been able to savor a three-finger thick rare steak grilled by Dario Cecchini. I’ve written about Dario’s butcher shop and restaurants many times (here, here, here and here). And I have not had a steak to compare in the U.S. 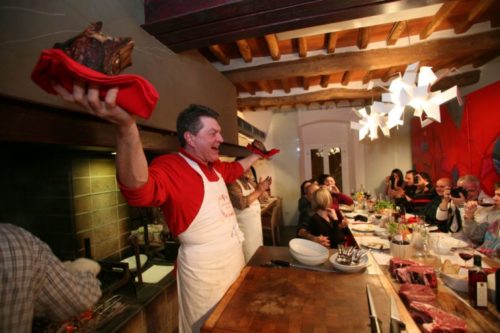 But now I hear Dario has come to my continent. Instead of flying for eight hours, I just need to catch a plane to Nassau, Bahamas. Dario’s first steakhouse outside of Italy opened December 22, 2018. Called Carna, it’s located in the Baha Mar resort.

It’s time to take a vacation!