In stories of medieval knights and castles it is not uncommon to read of defenders throwing large stones and boiling oil down on invaders trying to scale the walls. 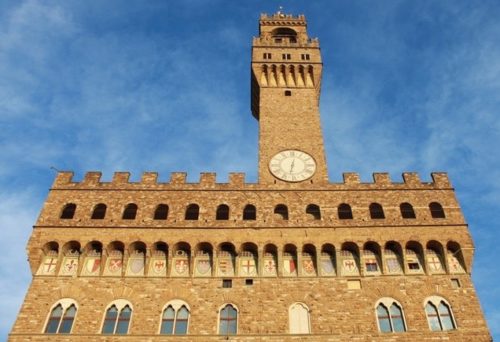 Although Florence was a walled city – encircled by the last version of high walls and gates in 1333 – the ruling class worried as much about threats from within as those from outside. To defend the Florentine government from an insurrection by warring rival clans they made the Palazzo Vecchio a completely defensible structure with thick high walls, sturdy reinforced metal-studded doors, small high windows, and because they couldn’t put in a moat or a draw bridge, they added murder holes to the design of the civic palace.

Murder holes, known as meurtrière in French and caditoia in Italian, are high large openings designed for defenders to kill attackers. Projectiles can be thrown or shot at the attackers while the defenders remain relatively safe.

There two classes of defensive openings: holes in floors – murder holes – for dropping dangerous substances or shooting at attackers; and holes in walls, such as arrow loopholes, used for shooting projectiles. For arrows they are called arrow slits or arrow loops (archeres) and for guns they are called cannoniers.

Defenders selected the least pleasant possible items to throw on their enemies. In the popular imagination this was invariably boiling oil, but there does not appear to be a single documented instance of oil being used; some speculate that it was too expensive. Defenders instead would throw or fire objects, such as large stones and arrows, or pour harmful material and liquids such as scalding water, hot sand, quicklime, tar, or molten lead (all of which could penetrate armor more easily than other weapons), down on attackers.

The type of murder hole on the Palazzo Vecchio is the machicolation, piombatoio in Italian (a word that alludes to molten lead more than anything else). It is a floor opening between the supporting corbels of a battlement, a direct conduit to the base of the defensive walls.

The Palazzo Vecchio murder holes may have been added to fortify the building during the short-lived rule of Gualtieri di Brienne, Duke of Athens, brought in by the city’s ruling class in 1342 to realize a medieval version of “draining the swamp”. A fresco by Orcagna (1308-1368), entitled “Expulsion of the Duke of Athens,” has one of the earliest depictions of the Palazzo Vecchio. It is of St. Anne, on whose feast day in 1343 the Florentines rebelled against the tyrant. The murder holes he had incorporated into the battlements of the Palazzo Vecchio did not save him.

The last time the murder holes may have been used was during the Pazzi Conspiracy in 1478, when the Pazzi clan, with help from Pope Sixtus IV, sought to displace the Medici family as the de facto rulers of Florence. 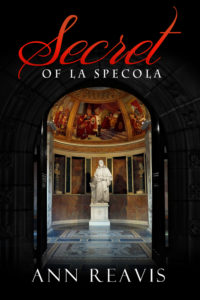 The Gonfaloniere of Justice and members of the Signoria (the titular rulers of Florence) successfully barricaded themselves in the Palazzo Vecchio to ward off in the Pazzi and their supporters.

The murder holes, which still exist at the top of the Palazzo Vecchio near the tapestry restoration workshop, play a role in the second Caterina Falcone mystery by Ann Reavis, entitled Secret of La Specola.

For other photos of the murder holes of the Palazzo Vecchio see here and here.