Many visitors to Florence in 2016 will either learn for the first time or will remember the Great Flood of Florence, which occurred on November 3, 1966, fifty years ago. Both the nonfiction and fiction lists are sure to include books about the flood and the response of the world to the catastrophe. Tuscan traveler has chosen two books, one and old favorite and one new for this year’s holiday “picks” list. 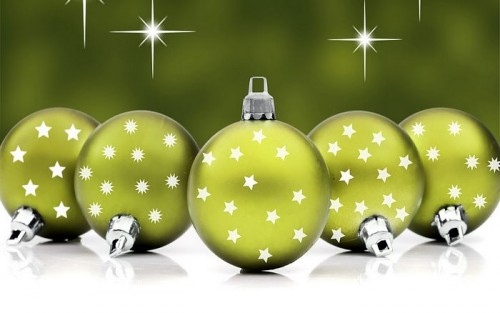 Lucrezia Borgia could have used the Renaissance version of Olivia Pope, but she is finally getting a proper revision of her reputation with two recent novels.

Any of the following novels will make great holiday gifts for those going to Italy next year or for for the armchair traveler with a love of all things Italian.

Falling in Love by Donna Leon 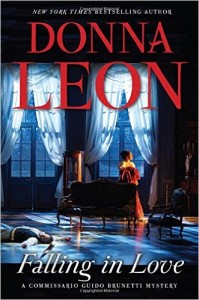 Donna Leon’s Death at La Fenice, the first novel in her beloved Commissario Guido Brunetti series, introduced readers to the glamorous and cutthroat world of opera and one of Italy’s finest living sopranos, Flavia Petrelli—then a suspect in the poisoning of a renowned German conductor. Years after Brunetti cleared her name, Flavia has returned to Venice and La Fenice to sing the lead in Tosca.

Brunetti and his wife, Paola, attend an early performance, and Flavia receives a standing ovation. Back in her dressing room, she finds bouquets of yellow roses—too many roses. An anonymous fan has been showering Flavia with these beautiful gifts in London, St. Petersburg, Amsterdam, and now, Venice, but she no longer feels flattered. And when a talented young Venetian singer who has caught Flavia’s attention is savagely attacked, Brunetti begins to think that Flavia’s fears are justified in ways neither of them imagined. He must enter in the psyche of an obsessive fan before Flavia, or anyone else, comes to harm.

My Brilliant Friend by Elena Ferrante 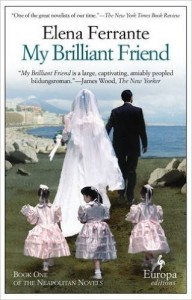 A modern masterpiece from one of Italy’s most acclaimed authors, My Brilliant Friend is a rich, intense, and generous-hearted story about two friends, Elena and Lila. Ferrante’s inimitable style lends itself perfectly to a meticulous portrait of these two women that is also the story of a nation and a touching meditation on the nature of friendship. This is the first of four known as the “Neapolitan Quartet.”

The story begins in the 1950s, in a poor but vibrant neighborhood on the outskirts of Naples. Growing up on these tough streets the two girls learn to rely on each other ahead of anyone or anything else. As they grow, as their paths repeatedly diverge and converge, Elena and Lila remain best friends whose respective destinies are reflected and refracted in the other. They are likewise the embodiments of a nation undergoing momentous change. Through the lives of these two women, Ferrante tells the story of a neighborhood, a city, and a country as it is transformed in ways that, in turn, also transform the relationship between her protagonists, the unforgettable Elena and Lila.

Elena Ferrante is the pen-name of an Italian novelist whose true identity is not publicly known. Though heralded as the most important Italian novelist of her generation, she has kept her identity secret since the publication of her first novel in 1992. The fourth book of Ferrante’s Neapolitan quartet, The Story of the Lost Child, appeared on the New York Times 10 Best Books of 2015.

The Sixteen Pleasures by Robert Hellenga 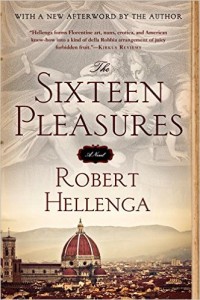 With graceful, assured prose, this 1994 novel gives a wry but empathetic view of the human character and an authoritative command of fascinating background detail are among the distinguishing features of this deeply satisfying first novel. Set in Florence after the terrible Arno flood of 1966, it is told partially by narrator Margot Harrington, a 29-year-old American book conservator who has come to Italy as one of the “mud angels” who volunteer in the wake of the disaster.

Many strands wind through the rest of the narrative: details about techniques of book and art restoration, observations of convent life refracted through Margot’s Protestant sensibilities and such arcane (and humorous) information as the methods by which a canonical court decides whether a man is truly impotentia coeundi (and thus entitled to an annulment).

The Flood by David Hewson 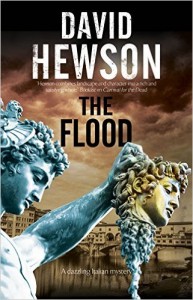 A dazzling Italian mystery, rich in intrigue and dark secrets, from an internationally bestselling crime writer at the height of his powers.

Florence, 1986. A seemingly inexplicable attack on a church fresco of Adam and Eve brings together an unlikely couple: Julia Wellbeloved, an English art student, and Pino Fratelli, a semi-retired detective who longs to be back in the field. Their investigation leads them to the secret society that underpins the city: an elite underworld of excess, violence and desire.

Seeped in the culture of Tuscany’s most mysterious city, The Flood takes the reader on a dazzling journey into the darkness in Florence’s past: the night of the great flood in 1966. Hewson is a favorite of mystery readers who enjoy his series featuring police officers in Rome, led by the young detective and art lover Nic Costa, which began with A Season for the Dead.

The Pope’s Daughter by Dario Fo 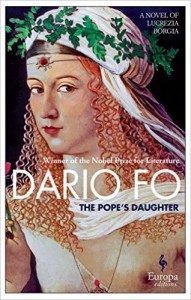 Lucrezia Borgia is one of the most vilified figures in modern history. The daughter of a notorious pope, she was twice betrothed before the age of eleven and thrice married—one husband was forced to declare himself impotent and thereby unfit and another was murdered by Lucrezia’s own brother, Cesar Borgia. She is cast in the role of murderess, temptress, incestuous lover, loose woman, femme fatale par excellence.

But there is always more than one version of a story.

Lucrezia Borgia is the only woman in history to serve as the head of the Catholic Church. She successfully administered several of the Renaissance Italy’s most thriving cities, founded one of the world’s first credit unions, and was a generous patron of the arts. She was mother to a prince and to a cardinal. She was a devoted wife to the Prince of Ferrara, and the lover of the poet Pietro Bembo. She was a child of the renaissance and in many ways the world’s first modern woman.

Dario Fo, Nobel laureate and one of Italy’s most beloved writers, reveals Lucrezia’s humanity, her passion for life, her compassion for others, and her skill at navigating around her family’s evildoings. The Borgias are unrivalled for the range and magnitude of their political machinations and opportunism. Fo’s brilliance rests in his rendering their story as a shocking mirror image of the uses and abuses of power in our own time. Lucrezia herself becomes a model for how to survive and rise above those abuses.

Blood and Beauty by Sarah Dunant 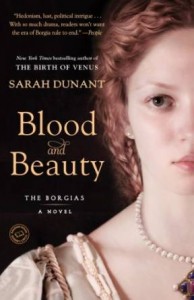 By the end of the fifteenth century, the beauty and creativity of Italy is matched by its brutality and corruption, nowhere more than in Rome and inside the Church. When Cardinal Rodrigo Borgia buys his way into the papacy as Alexander VI, he is defined not just by his wealth or his passionate love for his illegitimate children, but by his blood: He is a Spanish Pope in a city run by Italians. If the Borgias are to triumph, this charismatic, consummate politician with a huge appetite for life, women, and power must use papacy and family—in particular, his eldest son, Cesare, and his daughter Lucrezia—in order to succeed.

Cesare, with a dazzlingly cold intelligence and an even colder soul, is his greatest—though increasingly unstable—weapon. Later immortalized in Machiavelli’s The Prince, he provides the energy and the muscle. Lucrezia, beloved by both men, is the prime dynastic tool. Twelve years old when the novel opens, hers is a journey through three marriages, and from childish innocence to painful experience, from pawn to political player.

Stripping away the myths around the Borgias, Blood and Beauty is a majestic novel that breathes life into this astonishing family and celebrates the raw power of history itself: compelling, complex and relentless.

The Memory Key by Conor Fitzgerald 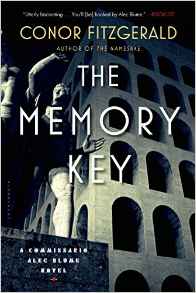 The sniper’s bullet doesn’t quite dispatch notorious terrorist Stefania Manfellotto, but the investigation into the attack on the Rome university campus that leaves Manfellotto brain damaged—as well as the subsequent fatal shooting there six months later of witness Sofia Fontana—could finally deal a death blow to the career of Commissioner Alec Blume in Fitzgerald’s cerebral fourth mystery featuring the maverick American expat (after 2012’s The Namesake).

By rights, Blume shouldn’t even be involved in the politically sensitive probe, which falls under the jurisdiction of the rival Carabinieri. But that detail isn’t about to deter him once his old mentor, magistrate Filippo Principe, appeals for help, any more than he would dream of changing his opinion on a road rage homicide just because his lover, Chief Insp. Caterina Mattiola, sees it differently. Blume’s readiness to pursue any leads in an increasingly puzzling case helps make him an outstanding detective, but also, within a society that puts such a premium on personal relationships, a perennial outsider.

A Beam of Light  by Andrea Camilleri 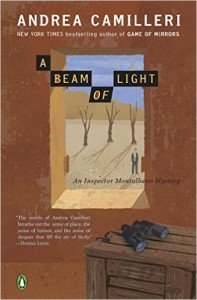 When Inspector Montalbano falls under the charms of beautiful gallery owner Marian, his longtime relationship with Livia comes under threat. Meanwhile, he is also troubled by a strange dream as three crimes demand his attention: the assault and robbery of a wealthy merchant’s young wife, shady art deals, and a search for arms traffickers that leads him deep into the countryside, where the investigation takes a tragic turn.

Also published in 2015, in Game of Mirrors Inspector Montalbano and his colleagues are stumped when two bombs explode outside empty warehouses—one of which is connected to a big-time drug dealer. Meanwhile, the alluring Liliana Lombardo is trying to seduce the Inspector over red wine and arancini. Between pesky reporters, amorous trysts, and cocaine kingpins, Montalbano feels as if he’s being manipulated on all fronts. That is, until the inspector himself becomes the prime suspect in an unspeakably brutal crime.

More Novels for Those Who Love Italy

In the right side column of this blog, near the top, there is a link to Tuscan Traveler’s Amazon Store. Buying books through the store does not increase the cost of the books to you, but does help to support this blog. The store can also be used to just browse for books about Italy without the need to make a purchase.

Tuscan Traveler welcomes suggestions for books to add to the list.