In the wake of the tragic 1966 flood of Florence, then-curator of Florentine museums Carlo Ludovico Ragghianti put out a call for Italian and international artists to donate art to replace the masterpieces that had been lost in the flood. As part of this campaign, the City of Florence accepted hundreds of notable works by artists from all over the world.

Thirty-two were by female artists including those whose donations have now been recently restored: Antonietta Raphael Mafai, Amalia Ciardi Duprè, Carla Accardi and Titina Maselli. This restoration project, sponsored by the Advancing Women Artists Foundation (AWA) in collaboration with the Musei Civici Fiorentini, was led by Dr. Antonella Nesi, curator of Florence’s 20th century Civic Collections, and undertaken by Florentine restorer Rossella Lari.

After decades in storage, these and other works collected at Ragghianti’s behest have found a home at the newly-opened Museo Novecento in Florence. The 20th century art in Florence finally got scholarly and popular attention in 2014, first with the opening of the new museum dedicated to this period, and then at the end of September with a temporary exhibition at the Galleria di Arte Moderna at Palazzo Pitti called ‘Spotlight on the XX Century’ (Luci sul ‘900).

AWA has also agreed to restore a total of 28 paintings and sculptures to be exhibited at the Museo Novecento in 2016 to commemorate the 50th anniversary of the flood.

As part of a project to safeguard and promote a hidden part of Florence’s heritage, the Advancing Women Artists Foundation has also published a new book about the female artists whose art forms part of the Florentine Civic Collections. The book by Linda Falcone and Jane Fortune, When the World Answered: Florence, Women Artists and the 1966 Flood, published in October 2014 by The Florentine Press, provides additional and timely insight into this period.

With this book, the team continues Jane Fortune’s quest to bring to light Florence’s “hidden” female artists. Her book Invisible Women: Forgotten Artists of Florence, which became the basis of an Emmy-award winning PBS documentary, sought out examples from the Renaissance through the Early Modern period. 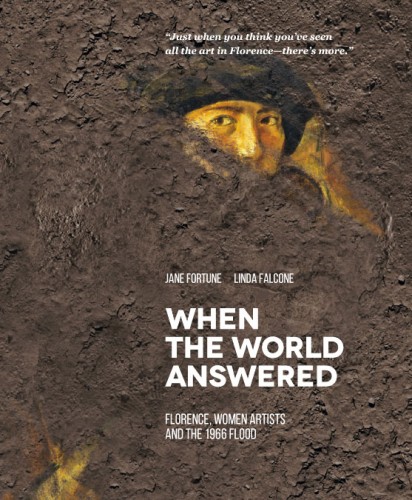 With When the World Answered, they wondered if 20th century Florence continued to be a powerhouse for female talent and what prompted the “Flood Ladies” to donate their art to Florence.

In four years of research and writing, interviewing surviving “Flood Ladies” and their families, Falcone and Fortune discovered women whose contributions to Futurism, Magic Realism and Abstractionism in Italy are worthy of in-depth study. This book tells the stories of 23 of these women artists because “their stories must be salvaged along with their art if we are one day to understand the true significance of their contributions.”

On October 21, the Museo Novecento will be hosting a premiere event for the living artists and their family members, with the book’s authors, top museum executives and Vice Mayor Cristina Giachi.

The public event is scheduled for Wednesday October 22, 2014, at 6:30pm when the authors will present their book at the Accademia delle Arti del Disegno (via Orsanmichele 4, Firenze), a venue that has supported women artists since Artemisia Gentileschi became its first female member in 1616. After the talk, attendees will be invited to visit the headquarters of this prestigious institution. The event is free and open to the public with registration at the following link: floodladies-talk.eventbrite.it

To enhance the connection between the flood, women artists and the City of Florence, The Florentine, licensed guide Alexandra Lawrence and the Advancing Women Artists Foundation will be offering a series of guided walks. On Saturday October 25 at 10am, the group will meet at Santa Croce and walk towards Le Murate, visiting and talking about some of the important spaces and artworks affected by the flood of 1966.

Saturday November 8 at 10am there will be a visit to the Museo Novecento focusing particularly on the newly restored works by female artists.

Both walks cost 33 euro including guide and book, plus museum entrance fees. To reserve, please contact Alexandra Lawrence at a.lawrence@theflorentine.net.