In 2015, a German was appointed to run the most Italian of museums in Florence, Le Gallerie degli Uffizi, the Galleries of the Uffizi (includes not only the Uffizi Gallery, but also the Vassari Corridor, the Boboli Gardens and the Palazzo Pitti), the first time a foreigner has run the museum. After only three years on the job, the new German director of the Uffizi, Eike Schmidt, is drawing international attention by demanding the return of a painting stolen by Nazi troops in 1943 and presently in the hands of a German family. Schmidt says the German government has a “moral duty” to help bring the still life Vase of Flowers, painted by Dutch master Jan van Huysum back to the museum. 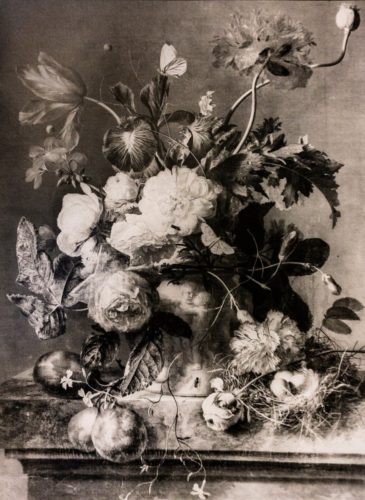 Tuscan Grand Duke Leopold II originally bought the painting in 1824, which he displayed in the Palazzo Pitti. Included in a large collection other Dutch masters, Vase of Flowers was part of the Uffizi’s collection (the gallery opened to the public in 1769) for over one hundred years before it taken down and hidden away in the Tuscan countryside to protect it (along with most of the art in the Uffizi) during World War II. But German troops found and stole this work, among many others, in 1943 as they retreated north away from the Allied advance.

The fact that Vase of Flowers survived the theft and journey to Germany came to light in 1991 after the unification of Germany. Intermediaries for the unidentified family have demanded payment – which the Uffizi refuses – while Germany says a statute of limitations on crimes committed more than 30 years ago stops it from intervening.

Schmidt has called on Germany to abolish the statute of limitations on works stolen by the Nazis so all looted art can return to its “legitimate owners.” “Because of this, the wounds of World War Two and Nazi terror have not yet healed,” Schmidt said in a statement on the gallery’s website.

With a most modern method, the ancient Uffizi made the controversy public on Twitter  with hashtags like #Nazis and #Wehrmacht to make digital demands that Germany return the stolen painting. With a link to a lengthy “appeal to Germany for 2019” the museum also posted on its website a video showing Director Schmidt affixing a black-and-white photo of Van Huysum’s still life in the Room of the Putti of the Pitti Palace, where the painting once hung. 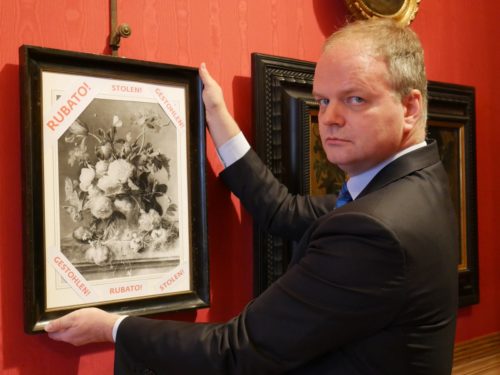 Around the photo in bold red lettering is the word “stolen” in Italian, English and German, and a caption posted in front of it explains that the work was taken by German soldiers and is now held by a German family. Schmidt hopes that generating publicity about Vase of Flowers should make it harder for the Germans who hold the painting to try to sell it. 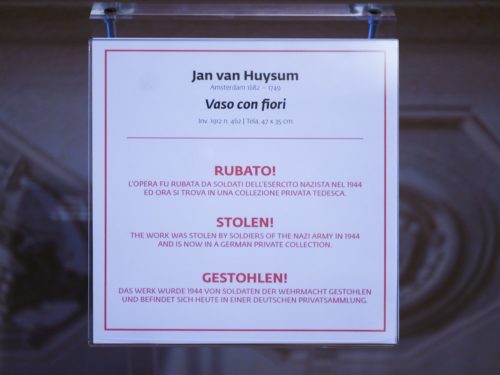 The painting has been the object of “on-and-off negotiations” for decades between Italian authorities and agents for the German family that has the work, Mr. Schmidt said. He said he did not know the identity of the family, but that it was “very likely” that they were related to the soldier who took the painting during the war.

Last year, a representative for the German family offered to return the work in exchange for a substantial sum of money (Italian media reported the sum as 500,000 euros, or about $567,000), prompting the museum — and Italian judicial authorities — to take action.

“We’re trying to get the German family to understand that we are not in a legal position to buy something that according to Italian and international law we already own,” said Mr. Schmidt.

Italian authorities have opened a criminal investigation into the painting’s movements since it was taken from Italy. They have reportedly asked German judicial authorities to cooperate in the investigation.

Eike Schmidt, 50, was born in Freiburg im Breisgau, and studied Medieval and Modern Art History in Heidelberg, where he also completed a doctorate with a thesis on “The Medici Ivory Sculpture Collection in the 16th and 17th Centuries.” From 2009 until his move to the Uffizi in 2015, he was at the Minneapolis Institute of Arts as curator and director of the Sculpture, Applied and Textile Arts Department. From 1994 to 2001, he worked as a researcher at Florence’s Deutsches Kunstshistorisches Institut. Between 2001 and 2006, he was curator and researcher at Washington D.C.’s National Gallery of Art, from 2006 to 2008 curator of the Sculpture and Decorative Arts Department at the J. Paul Getty Museum in Los Angeles. Between 2008 and 2009, he worked at Sotheby’s in London as director and head of the European Sculpture and Applied Arts Department.