Instead of relying on internet sites and travel guides to inform your upcoming visit to Italy, get a copy of these histories, essays, cultural musings, and cookbooks to heighten the anticipation for your travels. Guide books are great planning tools, but an in-depth discussion of history and culture and cuisine will result in a richer Italian adventure. These books are set in Rome, Tuscany, Venice, Florence and Sicily. (Please add to the list by commenting on this post and check out last year’s picks.) 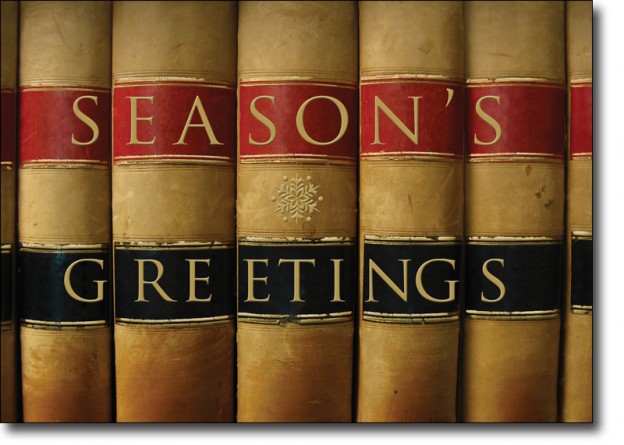 Tasting Rome is a love letter from two Americans to their adopted city, showcasing modern dishes influenced by tradition, as well as the rich culture of their surroundings.

Studded with narrative features that capture the city’s history and gorgeous photography that highlights both the food and its hidden city, you’ll feel immediately inspired to start tasting Rome either in the actual city or at home.

A Literary Tour of Italy by Tim Parks 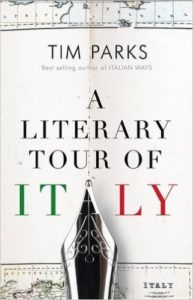 Tim Parks with his finely observed writings on all aspects of Italian life and customs has now compiled a selection of his best essays on the literature of his adopted country.

From Boccaccio and Machiavelli through to Moravia and Tabucchi, from the Stil Novo to Divisionism, across centuries of history and intellectual movements, these essays give English readers, who love Italy and its culture, a primer on the best writing throughout Italian history.

Kirkus says: “Italian identity, [Parks] concludes, comes from a sense of belonging to groups such as family, friends, region, church, and political party. He often takes issue, therefore, with biographers who fail “to draw on the disciplines of psychology and anthropology” to examine the personal and historical contexts of their subject’s life.”

In Other Words by Jhumpa Lahiri 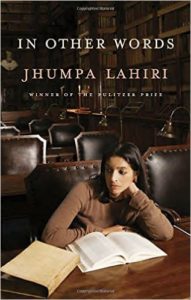 Over the course of four novels and story collections, Jhumpa Lahiri has written about themes of identity, estrangement and belonging. She has received numerous awards, including the Pulitzer Prize; the PEN/Hemingway Award; the Premio Gregor von Rezzori; the DSC Prize for South Asian Literature; and the 2014 National Humanities Medal.

All the while, the Indian-American author has faced these issues herself. Torn between two worlds, she has felt like an outsider in both. The author has spent a lifetime caught in the clash between her parents’ Old World customs and the American culture that has so rewarded her achievements.

She fell in love with Italy and dreamed of immersing herself in its language and culture. It was an infatuation that became an obsession. In the end, Italy proved to be a place to neutralize tensions that had haunted her for decades. Learning it is an act of rebirth, of rebuilding a fractured self and changing course. In Other Words appeals on many levels—as a passion project, cultural document and psychological study. True to the nature of her quest, Lahiri wrote this book in Italian, rough edges and all; it conveys an intimate view of the complicated bonds that exist between language and identity.

Tuscany: A History by Alister Moffat 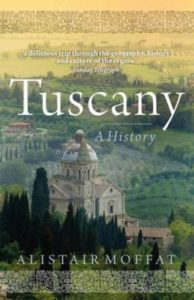 Ever since the days of the Grand Tour, Tuscany has cast its spell over world travelers. What is it that makes this exquisite part of Italy so seductive? To answer this question Alistair Moffat embarks on a journey into Tuscany’s past. From the flowering of the Etruscan civilization in the 7th century BC through the rise of the powerful medieval communes of Arezzo, Luca, Pisa and Florence, and the role the area played as the birthplace of the Renaissance, he underlines both the area’s regional uniqueness as well as the vital role it has played in the history of the whole of Italy.

Insightful, readable and imbued with the author’s own enthusiasm for Tuscany, this book includes a wealth of information not found in tourist guides.

City of Fortune: How Venice Ruled the Seas by Roger Crowley 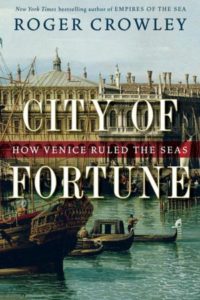 The rise and fall of Venice’s empire is an irresistible story and Roger Crowley, with his rousing descriptive gifts and scholarly attention to detail, is its perfect chronicler.

The New York Times bestselling author charts Venice’s astounding five-hundred-year voyage to the pinnacle of power in an epic story that stands unrivaled for drama, intrigue, and sheer opulent majesty. City of Fortune traces the full arc of the Venetian imperial saga, from the ill-fated Fourth Crusade, which culminates in the sacking of Constantinople in 1204, to the Ottoman-Venetian War of 1499–1503, which sees the Ottoman Turks supplant the Venetians as the preeminent naval power in the Mediterranean.

In between are three centuries of Venetian maritime dominance, during which a tiny city of “lagoon dwellers” grow into the richest place on earth. Drawing on firsthand accounts of pitched sea battles, skillful negotiations, and diplomatic maneuvers, Crowley paints a vivid picture of this avaricious, enterprising people and the bountiful lands that came under their dominion. From the opening of the spice routes to the clash between Christianity and Islam, Venice played a leading role in the defining conflicts of its time—the reverberations of which are still being felt today.

As an award-winning chef and the owner of six busy restaurants across two continents, Nancy Silverton was so consumed by her life in the professional kitchen that for years she almost never cooked at home. With her intense focus on the business of cooking, Nancy had forgotten what made her love to cook in the first place: fabulous ingredients at the height of their season, simple food served family style, and friends and loved ones gathered around the dinner table. Then, on a restorative trip to Italy—with its ripe vegetables, magnificent landscapes, and long summer days—Nancy began to cook for friends and family again, and rediscovered the great pleasures and tastes of cooking and eating at home. 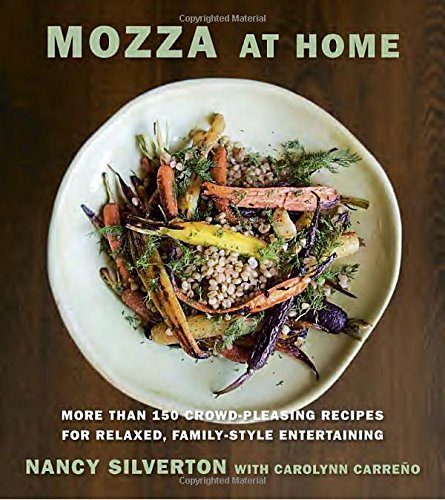 Now, in Mozza at Home, Nancy shares her renewed passion and provides nineteen menus packed with easy-to-follow recipes that can be prepared in advance and are perfect for entertaining. Organized by meal, each menu provides a main dish along with a complementary selection of appetizers and side dishes.

Whether it’s Marinated Olives and Fresh Pecorino and other appetizers that can be put out while you’re assembling the rest of the meal; simple sides, such as Roasted Carrots and Chickpeas with Cumin Vinaigrette, that are just as delicious served at room temperature as they are warm; or savory main dishes such as the Flattened Chicken Thighs with Charred Lemon Salsa Verde—there is something here for every occasion.

And don’t forget dessert—there’s an entire chapter dedicated to end-of-meal treats such as Devil’s Food Rings with Spiced White Mountain Frosting and Dario’s Olive Oil Cake with Rosemary and Pine Nuts that can be prepared hours before serving so that the host gets to relax during the event, too.

Enjoy this diverse group of books through the winter months and then in the spring head to Italy because everyone should be Italian once in their lives.