Death at the Duomo is the first book, just released, in a new series of mystery/thrillers set in Florence, Italy. The Renaissance City’s fictional murder rate is about to rise, requiring the pairing a young Florentine detective, Caterina Falcone, half American, half Italian, with Max Turner, an agent from the American Embassy. The first novel begins with an explosion outside the Duomo on a festival day. 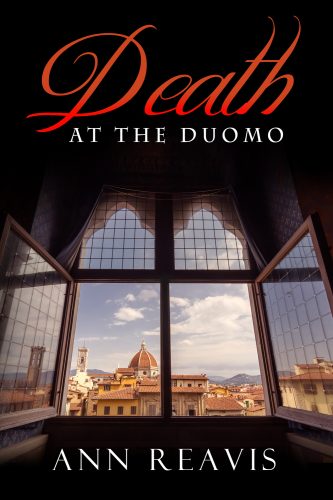 (Most long-time readers of this website know that the author of Death at the Duomo and Tuscan Traveler are one in the same. So this is the semi-strange situation of a self-interview to announce the book’s launch.)

Where did you get the premise for Death at the Duomo?

I love mysteries of all kinds, but especially those set in countries not my own. My favorites are by Donna Leon, Fred Vargas, Jason Goodwin, Daniel Silva and Joseph Kanon. After I had lived in Florence for a few years, I kept discovering places or events that I thought would be perfect for a murder. One was the exhibit of anatomical waxes at the La Specola Museum (the site used in the upcoming Caterina Falcone mystery) and another was Scoppio del Carro (literally, the Explosion of the Cart), the event at the beginning of the first book. With the colorful history of Florence there are unending possibilities for intriguing plots.

Do you prefer to write a novel or a non-fiction book?

I started Tuscan Traveler to keep my writing “up to snuff”. The website provided the basis for my first books, Italian Food Rules and Italian Life Rules, as well as giving me bits of information for my touring clients. I found, however, that it was more fun to incorporate the scenes from Florentine life, information about Tuscan food, and tidbits from historical Florence into a novel. So I gave Caterina Falcone a father who is a chef and restaurant owner. I learned that FBI agents are stationed at most US embassies, but have restrictions placed on how they operate in foreign countries, and Max Turner came to life. I especially enjoy exploring the experiences, good and bad, of foreigners when they encounter the Italian food and life rules, so each of the mysteries will involve tourists and expats in Florence and Tuscany.

What was the best part about being a writer in Italy?

I have a great group of writing friends who meet two times a year in Matera, a fascinating town in the Basilicata region. In the spring a small group meets for a brainstorming session. Death at the Duomo was born there. In the fall the Women’s Fiction Festival takes place. The second year I went the speakers included experts in forensics, cyber-crime and investigations of international crimes. The third or fourth edition concentrated on food writing. Recent years have been rich with information about indie publishing. Every year, literary agents and editors from major publishing companies are available for pitches from authors and staff panels on what’s new in the world of publishing. 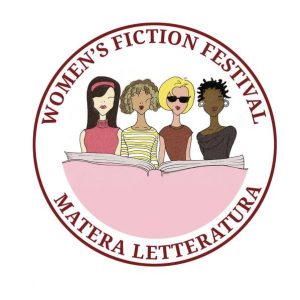 Are you going to write a memoir about your sixteen years in Italy?

No. Others have written much better books than I could, ranging from the more standard “under the Tuscan sun” narratives to innovative memoirs, such as Dianne Hale’s two books on language and Mona Lisa.

What are your favorite Italian-theme books?

Besides my own, I would pick any book by Donna Leon, The Tigress of Forli by Elizabeth Lev, any book by Beppe Severgnini, The Venus Fixers by Ilaria Dagnini Brey, any book by Conor Fitzgerald and Medici Money by Tim Parks. Other books that I like can be found here.

Today, women turn to magazines—Elle, Vogue, and In Style—to learn the best hair and cosmetic tips. They also visit their favorite dermatologist. In Renaissance Italy, cosmetics and hair care were very much part of the conversation of the nobility. Caterina Sforza, after she retired from defending the castle and married a Medici, developed her own line of herbal cosmetics and put them in a book, Gli Experimenti (1490).

Isabella Cortese, an Italian Renaissance alchemist, wrote her own book in 1561: I secreti della signora Isabella Cortese (The Secrets of Lady Isabella Cortese). But before Caterina and Isabella there was a doctor in Salerno who did the research and wrote a health and beauty treatise that was followed for four-hundred years, De Ornatu Mulierum, one section of what became known as the Trotula Minor.

Trotula de Ruggiero, also known as Trotula of Salerno, was reportedly born around 1090, into a wealthy family, which must have encouraged the education of women. In a lucky accident of historical timing a new medical school was built in Salerno in place of a Benedictine monastic dispensary dating back to the late 700s.

La Scuola Medica Salernitana condensed the knowledge of old treatises of Latin, Greek, Arabian and Hebrew medicine. It was the most important school of medicine in Europe in the Middle Ages, the predecessor of the modern medical university. It was the first academic institution to offer degrees and boasted a very inclusive approach to medicine, fusing three scientific traditions—European (based on the classical Greek and Roman knowledge), Islamic and Jewish.

Its most progressive feature was that, unlike other schools at the time, women were permitted to study there and even teach. Trotula stood out from her contemporaries. She became a professor at the school. She reportedly wrote the Trotula Major and Trotula Minor, a group of treatises on women’s medicine. (Recent research questions the attribution to one person.) Over 100 manuscripts of the De Ornatu Mulierum, devoted to beauty maintenance,  were circulated throughout Europe for several centuries.

Being blonde was better in Renaissance Italy. Just step into the Botticelli and the Filippo Lippi rooms at the Uffizi to see that there is rarely a depiction of a brunette. Trotula provided the recipes to achieve the look:

Bleaching and coloring hair took five days. The bleach was made from walnut shells and the bark of the same tree, boiled in water to which “alum and oak apples” were added. The mixture was smeared through the hair, then covered with leaves, tied with strings and left for for two days (except when exposed to the sun, see below). The excess was combed out and for three days thereafter the hair was colored with a paste made from “oriental crocus, dragon’s blood, and henna mixed with brazilwood.” The final step was a thorough rinse with hot water.

Lengthy hours in the hot sun served as the heating mechanism that activated the “bleach” (the concoction described above for the first two days), were necessary. The process was difficult because upper-class women also wanted to keep their skin paler than pale. Therefore, they had to sit outside for hours fully covered to protect their skin with hats to protect their faces. The hat, called a solana, had the crown cut out in order to allow exposure to the sun’s rays to bleach the hair.

To cover the gray in black hair, De Ornatu Mulierum said to apply a mixture made by cooking “a green lizard in oil without its tail and head.” Then, oak apples were to be placed with oil in a dish and “let them be burned.” The ingredients were pulverized and mixed in vinegar with “blacking made in Gaul.” The paste was applied to the hair and left until all the gray was gone.

To encourage hair growth the  treatise said “take barley bread with the crust, grind it with salt and bear fat. But first burn the barley bread. With this mixture anoint the place and the hair will grow. In order to make the hair thick, take agrimonies and elm bark, root of vervain, root of willow, southernwood, burnt and pulverized linseed, and root of reed. Cook all these things with goat milk or water,” and apply to the head.

It was believed that seborrhea and dandruff were produced by worms growing under the scalp. To eliminate them Trotula recommended washing the hair with vinegar, rosemary water, nettles, mint, thyme and other herbs. And lice and mites were frequently a problem, even for the well-born: “For itch-mites eating away at the hair. Take myrtleberry, broom, [and] clary, and cook them in vinegar until the vinegar has been consumed, and with this rub the ends of the hair vigorously. This same thing removes fissures of the head if the head is washed well with it.”

Another recipe described the ingredients for a perfumed hair powder. “Take some dried roses, clove, nutmeg, watercress, and galangal. Let all these, powdered, be mixed with rose water. With this water let her sprinkle her hair and comb it with a comb dipped in this same water so that [her hair] will smell better. And let her make furrows in her hair and sprinkle on the above-mentioned powder, and it will smell marvelously.”

The upper-class Renaissance woman sought a high hairline, since a wide and high forehead was thought to be trait of intelligence and beauty during that era. Those who were not blessed with a naturally high forehead plucked their hairlines in order to get the desired effect. Then the area was rubbed with a pumice stone to hide any evidence of tweezing and to assure that no lines marred the brow. Thin light eyebrows were mandatory, so they were tweezed and bleached or cut to make certain that they were not too prominent. (Check out Mona Lisa’s lack of brows.) Eyelashes were to be short and thin, certainly not lush and long as is popular today.

Trotula’s work was translated to English in 2001 by Monica Green. (A Medieval Compendium of Women’s Medicine. Edited and translated by Monica H. Green. (Philadelphia: University of Pennsylvania, 2001).

If you or your friends and family are going to Italy this year. Or if you want to do some armchair traveling, you should pick up Italian Food Rules and Italian Life Rules that I wrote after living in Florence for fifteen years. I broke every one of the “rules” before I learned to live like an Italian. I didn’t always agree with the rules, but I finally understood why they stood the test of time.

Did you know that Italians never drink cappuccino after 10 o’clock in the morning? Do you know why they never eat pizza for lunch? Why does the fruit vendor in the market yell at you when you check out the ripeness of the pears or the freshness of the green beans? I wrote about the rules and the reasons in Italian Food Rules.

Did you know that Italians don’t like wall-to-wall carpets? Why are they only allowed to have shutters in four colors in Tuscany? What’s the danger of air conditioning to Italians? Why are they carrying a neck scarf in the middle of the summer? Why is the Italian beach scene so different from the rest of the world, but exactly the same everywhere from Rimini to Calabria to Forte dei Marmi to Portofino? I tried to provide some insight in Italian Life Rules. 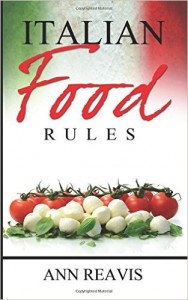 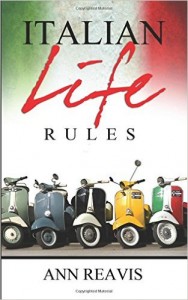 Digital books make great gifts and the paperback is the perfect size to carry in a pocket on your travels. Also on sale at Amazon.co.uk.