In the mid-1980s, I was sitting at the counter of the newly-opened Jackson Filmore Trattoria in San Francisco. I had finished a dinner that included gnocchi “come nuvole” (like clouds) as the Jack, the chef/owner, liked to say, when the subject of a dolce came up. “Have the zabaione,” Jack said. “Trust me.”

My seat at the counter was only a few yards from the kitchen stove. I watched as the pastry chef whipped up egg yokes in a deep round copper bowl, adding only Masala wine and sugar, and heating the mixture slowly as he whisked. Copper conducted the heat from the boiling water bath evenly, which allowed him to control the cooking process.

The volume of heavenly, luxurious yellow foam expanded as I watched. Served over strawberries, the warm zabaione flowing over the rim of a stemmed glass … no wonder I still remember this fabulous dessert thirty years later.

In 1998, I moved to Florence and stayed for over fifteen years. I thought my life would be filled with zabaione. Apparently no restaurant in Italy serves it and no home cook makes it anymore. A Florentine answered my wishful griping by saying that it was a dish made by mothers for their children and is too much trouble these days. I found zabaione gelato at Gelateria Vivoli in the late 90s and many artisanal gelaterias in Italy offer zabaione-flavored ice cream today.

Zabaione, an almost extinct classic sweet (kept alive only in America and still served at Jackson Filmore), is the perfect light, not overly sweet, ending to a dinner. The traditional recipe calls for only three ingredients—eggs, sugar and Marsala wine—and can be whipped up in just a few minutes. It’s useful to have a strong arm and a copper bowl.

One of the custard-like sauces that use egg yolks to thicken a liquid—crema pasticciera, hollandaise sauce and mayonnaise, come to mind—making zabaione is simpler in concept than in practice. Zabaione, like the others, is an emulsion, and the proportion of fat to liquid plays an important role. It requires patience when adding the Marsala to the egg yolks to prevent separation and care not to overheat and curdle the mixture.

Marsala is the most common wine used to make zabaione. But Gina DePalma, former pastry chef at Babbo Ristorante in NYC, makes her zabaione with Vin Santo, “because it is a wine with both sweetness and acidity.” She sometimes combine the Vin Santo with rum or grappa. In the Italian region of  Piedmonte, where zabaione originated, it is often made with bubbly Moscato D’Asti, a sweet local wine made with muscat grapes, or another Piedmontese wine, Brachetto D’Acqui. 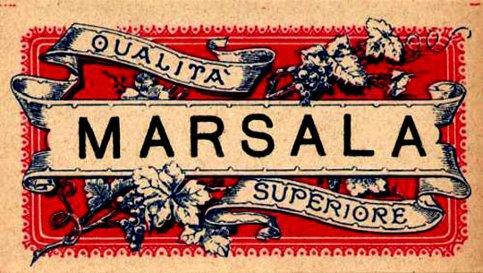 I’m no cook, only an enthusiastic “good fork” (as they say in Italy), so I won’t give you the recipe or full instructions here. But I recommend a slow reading of home-cook Frank’s post on Memorie di Angelina and professional pastry chef Gina DePalma’s write-up on Serious Eats. Both describe how to make the traditional zabaione that has been made for centuries in Italy. Mika at The 350 Degree Oven adds whipping cream. This allows for either a warm zabaione or the cold thick zabaione, popular in the United States.

I favor the warm eggy zabaione, made without heavy cream, served immediately after it’s made, allowing the aroma of Marsala to waft about me as I savor its sweetness with every bite. Hopefully, while sitting at the counter in Jackson Filmore Trattoria.