On April 25, 2015, Italy marks the 70th anniversary of the liberation of the country from Nazi domination. This year much of the focus is on the 200,000 partisans who helped bring about the country’s liberation.

Over one quarter of the participants in the Italian Resistance during World War II were women (55,000), many acting as couriers (staffette).

In 1943, the Resistance strengthened in Italy as many Italian men chose to join the Partisans rather than capitulate to the German policy requiring the Italian military to be incorporated into the German army or be rounded up and sent as laborers in Eastern Europe.

Women also joined the Partisans but their involvement in the Resistance was truly a voluntary one since they did not face these same consequences if they chose not to participate in the war effort. 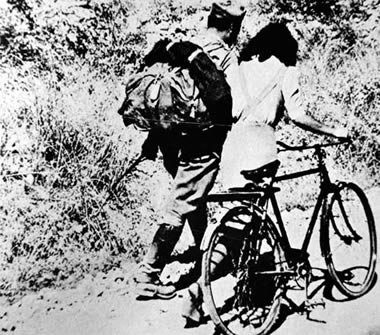 The first female partisans were couriers and spies. They were known as Staffette, a word for relay or courier.  Initially they brought, along with assistance in the form of food and clothing, news from home and information on enemy movements. Shortly, this spontaneous work became organized, and every detachment created its own couriers, which specialized in shuttling between the city centers and the command of the partisan units. They relayed messages to and from the Office of Strategic Services (OSS) Operational Groups (OGS). 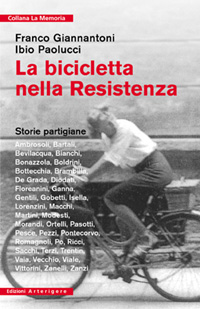 Frequently, these women had to cross German lines to accomplish their missions. Each time, they ran the risk of discovery, which they knew could result in torture or death.  Their work was delicate, difficult, and almost always dangerous.

Even when they didn’t cross the lines during combat under enemy fire, they had to pass through the steep slopes of mountain on paths off main roads with dangerous, cumbersome material, covering kilometers on bicycle or truck, often on foot, in the rain or snow. Even traveling by train or car, the couriers passed long hours, often forced to pass a night in a station or in an open field, facing the dangers of bombardments or a German ambush. 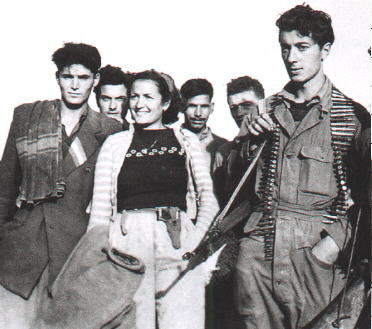 After a tactical operation, the retreating partisans were not always able to take those seriously wounded with them. If there were men too wounded to hide, the couriers remained to watch them, to give them the necessary treatment and to seek medical help. After a battle women partisans were frequently left in the occupied country in order to learn the enemy movements and to get the information to the partisan command.

During the transfer marches the women were the advance expedition. When the partisan unit arrived near a town, the courier was the first to enter in order to find out if there were enemy forces and how many there were, and if it was possible for the partisan column to continue on. 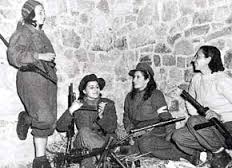 In addition to taking part in partisan activity, women also volunteered to work in the Women’s Groups for Defense and for the Assistance of the Freedom Fighters (gruppi di difesa della donna e per l’assistenza ai combattenti della libertà) or GDD. The GDD collected food, money and clothing. If these women were discovered supporting the Partisans in even these ways, they would be arrested and sometimes tortured or killed. The women in the GDD also played a key role in motivating other women into public activism and recruiting them to participate in various Resistance functions.

The key to the success of women in the Resistance was their collective, almost anonymous character. These were not superhuman beings, but members of the community, belonging to all levels of society. The Resistance of women was born, not from the will of a few, but from the spontaneous initiative of the many.

After the war, 200,000 Italians were registered formally as active members of the Resistance, of which official records show 55,000 were women. More were never identified as part of the fight against fascism and the Nazis.

A recent translation of Partisan Diary: A Woman’s Life in the Italian Resistance, by Ada Gobetti is a story of heroism, political courage and humanity. It was originally published in Italy in 1956.

The diary/memoir covers the resistance to the Nazis when they entry Turin on September 10, 1943 to the liberation of the city on April 28,1945.

Ada Prospero Gobetti recorded the events on an almost daily basis, a dangerous undertaking. She jotted down her entries in a cryptic English that only she could understand; at the war’s end she deciphered the jottings for publication. The act of keeping an anti-fascist diary during the Nazi occupation carried an automatic death penalty.

Her involvement in the resistance movement goes back to 1922. Ada’s husband, the anti-Fascist activist Piero Gobetti, founded the anti Mussolini/fascist pamphlet Rivoluzione Liberale. Gobetti was arrested and beaten to death by Fascist gangs at age 24.

Ada, who found time to translate Sir Francis Bacon and Alexander Pope while tending to her teenage son Paolo,vowed to continue his work, as did Paolo. Her pride in her son and at the same time her fears that he will be captured are central themes in this story.

This book reads like a thriller, it provides first-hand knowledge of how the partisans in Piedmont fought and who joined the struggle against the Nazis and the Fascists.

Ada ran a network of safe houses in Turin for anti-Fascists in need of refuge. Among these was the sister of the Auschwitz survivor Primo Levi, Anna Maria Levi. She and Paolo smuggled weapons and explosives into the Susa valley, adjacent to the French border, over mule paths and dense forests.

“4 September. It had gotten dark by now and soon we left with the new Tommy gun and what was necessary for derailing the train. We did not know exactly at what hour it would pass, but by now it was certain that no more civilian trains would pass by before dawn. We had to make the preparations quickly in order not to miss the strike.” — Ada Gobetti

Irma Bandiera was the treasured daughter of a wealthy family from Bologna. She became a partisan fighter in the VII Brigade Gruppi di Azione Patriottica (GAP) Gianni Garibaldi of Bologna. As was common with those who fought for the resistance she took a battle name: Mimma.

Captured with encrypted documents by the Fascists working with the German SS, after transporting weapons to her brigade near Castel Maggiore, she was tortured, blinded and then shot, having refused to give up the names of her comrades. On August 14, 1944, her body was left lying on the road near her home for a whole day as a warning to others who sought to join the resistance.

In her honor, a formation of partisans operating at Bologna was named First Brigade Garibaldi “Irma Bandiera”. She was awarded the Gold Medal of Military Valor (Medaglia d’Oro al Valor Militare).

After April 1945, Italian women began to participate in the politics of their country in unprecedented number. Fifty percent of the women elected to the postwar Parliament had a partisan background. The gains Italian women earned through their courageous work with the resistance resulted in them acquiring a seat at the table of Italian politics that they retain today.

And articles here and here

Amazon.com for  Partisan Diary: A Woman’s Life in the Italian Resistance by Ada Gobetti